I know it seems a bit pretentious to be talking about whether a console (which hasn’t even been released yet) is going to be any good or not, but hear me out when I say that Nintendo hasn’t been giving us any re-assuring signs!

The new Nintendo Switch is slated to release in March 2017, that’s less than 3 months from now, and the only AAA Nintendo title that has been announced is Zelda. If Nintendo is going to win over new fans, unfortunately this Zelda title is NOT ENOUGH. 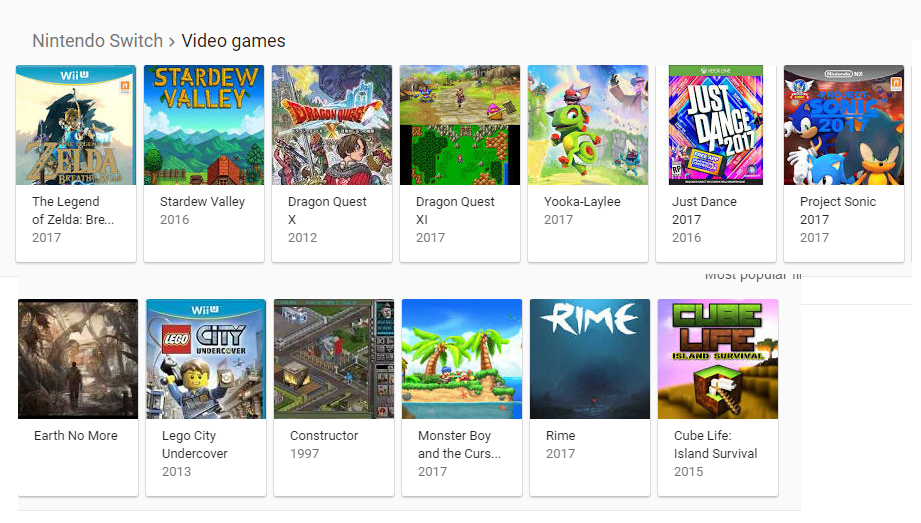 What really concerns me about this lineup, is that apparently Nintendo has not learned from the mistake of the Wii U which was: Misplaced Targeting. Nintendo primarily targeted children with the Wii U in much of their advertising, and this was a big mistake as we all witnessed.

Kids these days play minecraft, call of duty, and GTA. The people who truly love Nintendo are the ones who have been playing since they were kids. (They are mostly young adults now) Nintendo has a much older audience than they seem to be interested in.

Big Problems With the Wii U

The two biggest issues with the Wii U: Targeted to children, and lack of good Nintendo games. Sure Nintendo released Pikmin 3 (the quality of that game is debatable) and the new Smash Bros (Also very debatable as to whether it was really any better than Brawl or Melee) but what the Wii U seemed to be primarily dominated by was spin off titles.

Where was the main Mario game? I’m talking about the Mario Galaxy/Sunshine type games? Of course Zelda was missing completely from the Wii U picture, instead we get an HD remake. Pay $60 to play a remake of a game you beat over 10 years ago…

If Nintendo is truly interested in correcting the mistakes of their past, then why does the launch lineup look so terrible? Sure it might be a great idea to unveil something big nearing launch, but even Zelda + another AAA title might not be enough to convince people for fork over a few hundred dollars for a new system.

I love Nintendo, but what they did with the Wii U was one of the biggest fan backstabbings of all time. They asked us to buy their new console with a great promise of HD games and new Zelda, and then, they “Switched” on us at the end.

I spent more time on the Wii U playing Majoras Mask and Ocarina of Time, than I did playing any actual Wii U titles. And the titles I did play, Pikmin 3, Smash, Mario Kart, were non-stellar at best! Sure these games had great graphics, but there is a lot to be said about the execution of the gameplay itself. (That’ll be for another article.)

What Should Nintendo Do?

Firstly, this is a huge opportunity for Nintendo to really win back some fans, a new console means new opportunities. Nintendo has a great opportunity here; their marketing campaign for the Switch was killer and has everybody buzzing about it. The new Zelda title, while I personally am concerned that it will be another Skyward Sword alien Zelda game, still has a lot of people buzzing about it.

What Nintendo really should be doing now is honing in on all the things that makes Nintendo great. Sure, I understand that it takes resources and money to create new launch titles, but Nintendo really had a lot of time to plan this out. At the very least, GameCube should be included in the VC library, AND they should be releasing some big VC titles for free to those who purchase a Switch on launch.

It shouldn’t be very difficult to port over some popular gamecube titles to VC, heck, I’d buy the Switch just to play some gamecube games again, I wouldn’t care if Nintendo never released a new title if this was the case!

Lastly, Nintendo knows that fans have been begging for a new Mario Galaxy for a long time. EarthBound has also been on that list, but it seems like there are a lot of reasons that won’t be happening. There are a lot of opportunities to win back a lot of fans, and just judging by the currently announced launch lineup, it’s really not looking any different from the Wii U at this point.

We are still a few months out from the Switch launch date, so maybe Nintendo still has a few good tricks up their sleeves. I can’t make any solid judgement at this point, but for now, I’d say it’s not looking good. Nintendo can’t afford to have a non-stellar lineup, they really need to kill it on launch if they want to reverse the current public perception of Nintendo.