“We will not build a wall. Instead, we will build an economy where everyone who wants a good paying job can get one.”

No wall huh? We just going to leave the border how it is currently? An imaginary boundary that isn’t respected or secured? Okay, magically everything is going to be fixed….

“Now, you didn’t hear any of this from Donald Trump at his convention.  He spoke for 70-odd minutes – and I do mean odd.  And he offered zero solutions.”

So you claimed that Trump didn’t lay out any specific policy in his speech, and then you go right ahead and do the same thing? Classic Dem!

By the way, the last time I checked building the wall is A SOLUTION to the problem. And claiming that you’re not going to build a wall is NOT a solution at all.

Edit: And for the record, zero is an even number.

Dropping The Pay Raise Out of Nowhere

“We will not ban a religion. We will work with all Americans and our allies to fight terrorism. There’s a lot of work to do. Too many people haven’t had a pay raise since the crash.”

This just wen’t from an empty statement, “We will not ban religion.” (Yeah no one is, this statement is literally meaningless) to “Hey let’s raise pay for you guys!”

Totally not dropping random, millennial $15/minimum wage bait or anything like that. Again is there really any substance in this speech at all? “Too many people” is not a static. 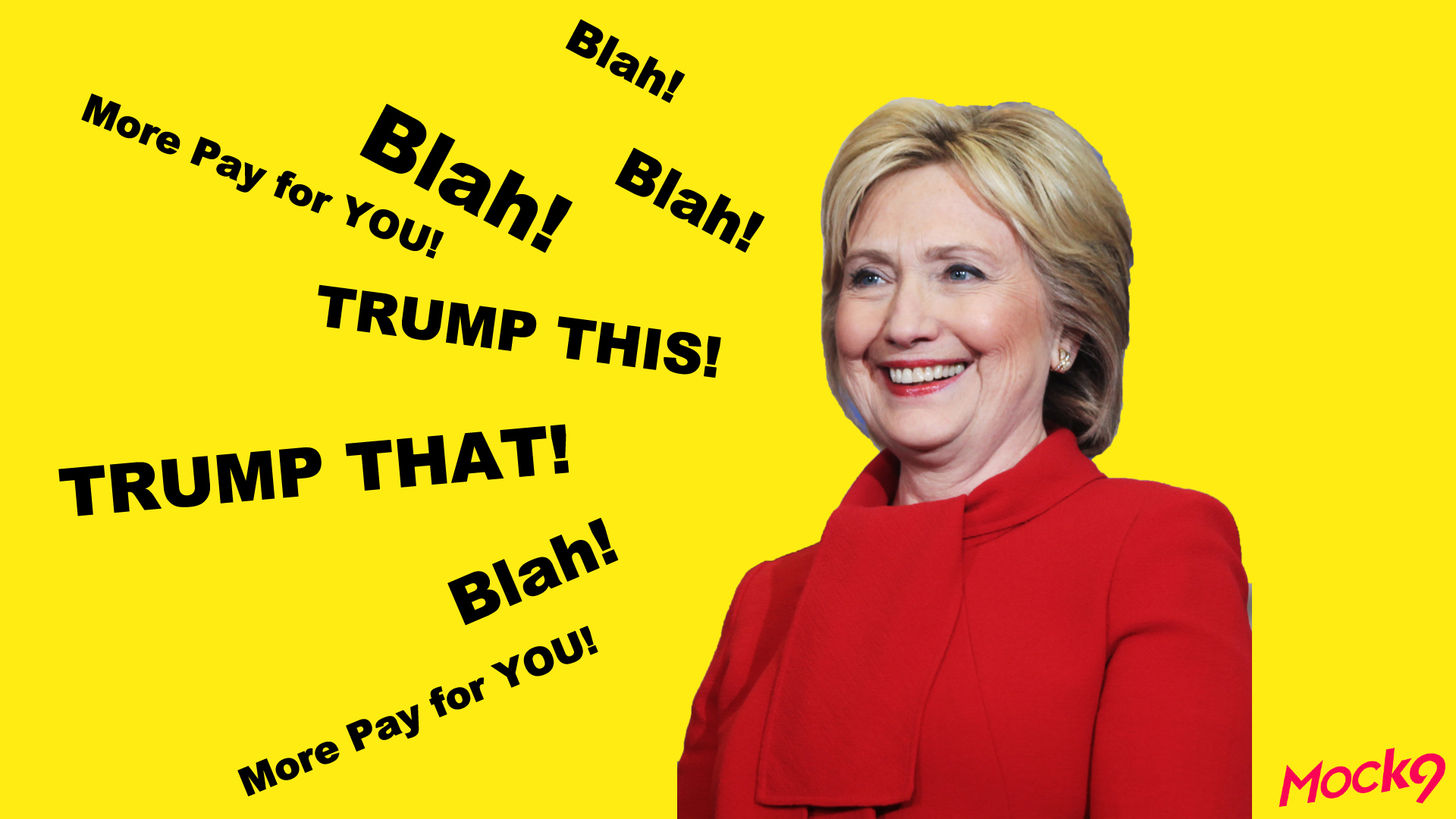 “Really? I alone can fix it? Isn’t he (Trump) forgetting? Troops on the front lines.”

Hahaha great one Hillary! Didn’t you remember, and then proceed to ignore our people on the front lines in Benghazi?

Climate Change = Money For You!

“I believe that climate change is real and that we can save our planet while creating millions of good-paying clean energy jobs.”

Creating clean energy jobs is going to “save” the planet? Oh an not just clean energy jobs, but good paying jobs too! She’s really trying hard to pander to the Bernie crowd, you know, the ones who blame all their problems on the selfish and corrupt capitalist system, and then demand more money for themselves.

Proud To Arm The #1 Sponsors of Terror

“I’m proud that we put a lid on Iran’s nuclear program without firing a single shot – now we have to enforce it, and keep supporting Israel’s security.”

Hillary is apparently proud of helping secure one of the worst deals in American history. Yeah let’s give Iran $150 Billion dollars as well as Nuclear weapons! #ImWithHer

Notice how she conveniently left those details out… Oh yeah Israel’s going to need “support” for their security now that we’ve armed their enemies with nuclear weapons! You’re actually right about that one Hillary, way to go!

Totally Not Selling Out

“We will defend all our rights – civil rights, human rights and voting rights… women’s rights and workers’ rights… LGBT rights and the rights of people with disabilities!”

Let’s just list off all the “victimized” groups and see if we can appeal to everyone! Voting rights? What voting rights? You mean the Bernie people whose votes were wasted?

Hillary’s 2016 DNC speech seemed to be an incoherent, shotgun blast of whatever the target audience might be able to latch onto. It was riddled with mere assumptions and non-statistically backed claims that would allow anyone who didn’t understand anything to simply nod their head and say, “Yeah that sounds good!”

Sure it’s so great to stand up for “civil rights, women’s rights, immigrants, etc…” But to claim that Trump didn’t lay out any solutions, and then to proceed giving a generic, bland, and totally loaded speech like that is just laughable.

View the official transcript here and see how targeted triggers and buzz words are dropped randomly throughout the speech. What a disaster: Here.

We knew since the beginning who was going to win. Bernie had no chance, Cruz had no chance, we already know the outcome of this election. Only people who are so politically out of tune, so out of touch with the rest of the world would believe otherwise.

Mark our words, Trump will win this election. We even put money on that! (Though we do not advise, and are in no way suggesting that you should do the same.)