Many Millennials and former Bernie supporters have jumped onto the 3rd party bandwagon, claiming Gary Johnson as the savior of this 2016 election. And of course, “comfort” sites around the net assure them that their vote is totally not a waste and that the choice they believe in is super special and respectable!

Well, truth is, it is a complete waste.

(And by 3rd party we mean an alternative to the primary 2 candidates, not an “independent” ) 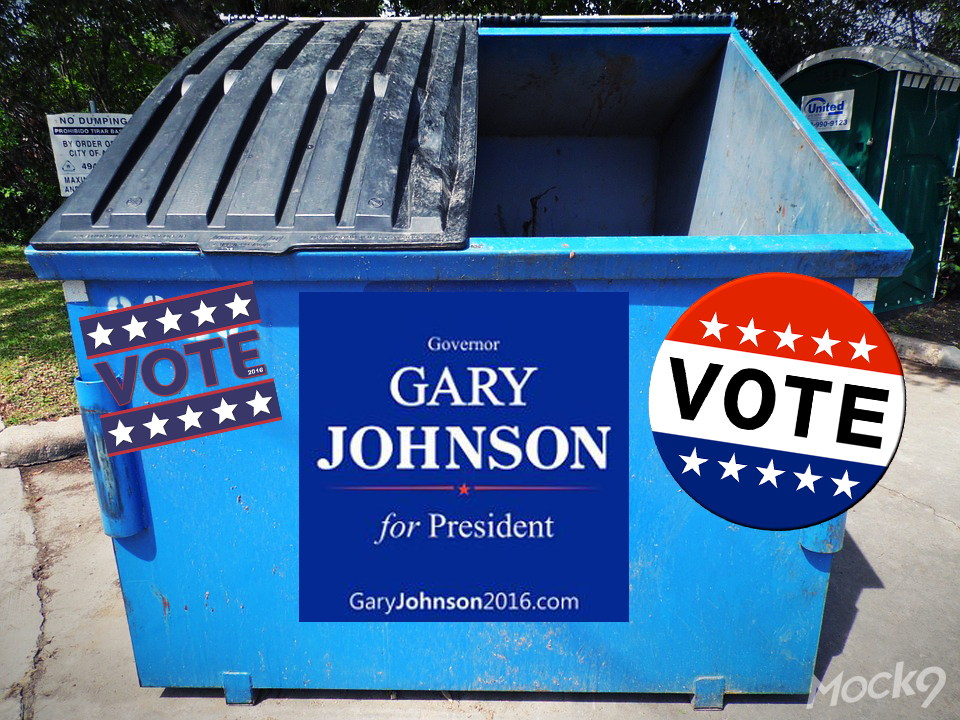 Come all! Vote for your favorite candidate! The least “evil” of them all! Make your vote totally count!

Why is My Vote a Waste? It’s MY Vote!

Yes it is YOUR vote. But the chances of your candidate winning are so unreasonably low, that you can pretty much guarantee a loss. In what world is that NOT a waste?

If you had a time machine and went back to a previous election, would you think your one vote would make a difference?

WASTE: a situation in which something valuable is not being used or is being used in a way that is not appropriate or effective

So let me get this straight, you claim to hate both Hillary and Trump, so your alternative is to vote for someone who has no chance of winning?

Either Trump or Hillary WILL still end up being the victor… What kind of strategy is that? It’s a pipe dream, an delusion, a total waste of time and energy! Your emotional attachment to your vote will do nothing, and no one will benefit from it, not even you.

The solution: Be an Adult About It

We understand both candidates have traits that can turn people off to them, We’re not here to make you like either one of them (MAGA). BUT that doesn’t mean you can just throw a fit about it and think you’re doing something “rebellious” and “cool” by voting for the hipster choice. It’s just not going to do anything for you if “Crooked” Hillary takes office.

Many Anti-Trump people literally regurgitate the same rhetoric the liberal media uses, without actually being able to reference one policy point that even remotely matches the rhetoric.

Trust me, morons on Facebook will make stupid remarks like, “Trump is the next Hitler” and then when I confront them about what exact policy is comparable to Hitler, they either are unable to provide one, provide a URL to an article they just googled, or they provide a misinterpretation.

I have yet to find ONE person who actually knows and understands Trump’s platform well, AND still prefers Hillary or some 3rd party over Trump. Be an Adult and make up your own mind, but make it up while being informed!

But I did make up my own mind! I want 3rd party!

Well you can’t have it! It’s not going to happen. (Highly unlikely, unreasonably to assume a victory)

“You are what’s wrong with this country! Telling people to give in! How dare you!”

No, siding with the winning force is actually a very strategic and smart move. Be smart, don’t just feel attached to your emotions. This is why most people, who know nothing about Trump, somehow think they know enough about him to dislike him, that’s called being ignorant.