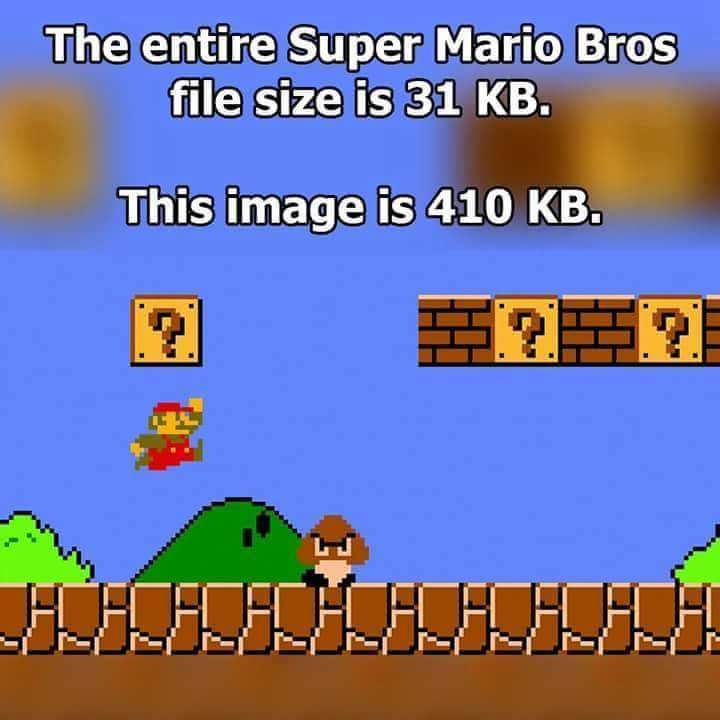 For a lot of people this is probably a “whooa wtf?” moment. Maybe most of the people sharing this image don’t understand how video games work, so hopefully this will be educational.

This Image is Higher Resolution Than The Game

Of course the image size is going to be larger! The image size 720×720 is much larger than the resolution for the original super mario bros (320×200). I think many photo editors or video makers would quickly recognize this flaw in the logic of this meme.

410KB is a large size for a 720×720 JPEG. I’m sure this image got edited, reposted, screen capped, and shared so many times that the original 410kb file (probably a PNG) has been lost somewhere on the internet. Download this image for yourself, it’s only 37.9KB.

Video games aren’t just one giant scrolling image. Each sprite and pixel is generated via a set of instructions called the game code. The code is comprised mostly of text and so even a very large file of code wouldn’t take up too much space.

If you’re curious about how old school games work, there is a really informational video that you can watch here.